Yes, it’s true: Anyone can run for President of the United States. Or, at least, anyone can declare they are running for President.

Declaring is the easy part. All a potential candidate needs to do is file FEC Form 2, Declaration of Candidacy for a Federal Office, with the Federal Election Commission (FEC) to get their name on a list of Presidential hopefuls. The form doesn’t even require the applicant to state they meet the qualifications for the office sought, so anyone truly CAN submit it.

According to Ballotpedia, the number of candidates filed to date for President in 2020 is a whopping 615 names. And it’s growing, pretty much daily.

While the FEC lists 208 candidates identified as Democrats who have either declared or are exploring runs, most of the attention is on the big names. Politico lists 13 declared major Democratic candidates, with another seven who are mulling a run. (Although the field changes so fast that this may change by the time this is published.)

And those are just the big names. Not included on the list, for example, are Democratic candidates Fred Wiand, Ryan A. Farber, Susanne Atanus, or Daphne Bradford, all of whom show modest cash balances on their campaign accounts as of December 31, 2018, the most recent FEC filing period for candidates who have reported contributions or expenditures. There are many, many more.

On the Republican side, 79 hopefuls have filed to run against President Trump, but of those 79, only about four, including Joe Collins, had cash balances on hand as of the end of December, and all are only a small fraction of the nearly $20 million listed in the President’s account.

The remainder of the filers, the largest contingent at 327, are listed as affiliated with third parties (Libertarian, Green), as independents, or as unaffiliated. Very few list any cash on hand, with the exception of James Valentine, a non-affiliated candidate who reported a modest $38,000 in his campaign coffers as of December 31. 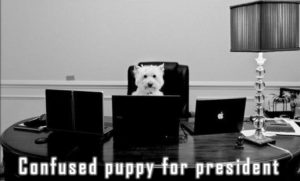 What would prompt someone to file as a Presidential candidate? It’s extremely unlikely that most of these individuals will be able to raise the cash and develop the campaign infrastructure to qualify for the ballot in all states. While some states have easier access rules, others, including Virginia, require candidates to submit a specified number of petition signatures. Virginia further requires signatures from each Congressional district.

For the bigger names, like the ever-growing Democratic field, there are potential perks even if you don’t win the nomination. You can gain name recognition and possibly a chance to give it a go again in the future. You may get a chance to share your vision for the country. There may be book deals or lecture tours. And you can claim the title of “2020 Presidential Candidate,” which, depending on the situation, may be good or bad.

For the not-so-big names, some of the same perks may apply, such as name and platform recognition, which could be good experience for future office aspirations, perhaps at a local or state level. Some might even qualify for the ballot – perhaps not in all states, but seeing one’s name on the ballot for President in even one state, even if only for a primary, could be enough satisfaction.

By this time next year, the field of Democratic hopefuls in particular should be winnowed down considerably. As we saw with the large Republican field in 2016, candidates will start dropping out as they realize they can’t manage the fundraising burden or perform poorly in debates, which are scheduled to commence as early as June 2019. Others will start dropping out after the primaries and caucuses start being held, beginning February 2020. Virginia is part of the first big wave of primaries, known as “Super Tuesday, on March 3, 2020. It will be interesting to see both who qualifies for our ballot and who is still in the race.

Best of luck to all candidates – 2020 is going to be a very interesting election year!