What’s the Buzz All About?

Ranked choice voting, or RCV, has popped up recently as the voting method of choice in a number of locations across the country, including the cities of Minneapolis and San Francisco and the state of Maine. You may have heard we recently utilized RCV to compile vote tallies for our “I Voted” sticker contest (more on that below). During the last two Virginia General Assembly sessions, bills were introduced to permit RCV in Virginia for regular elections, but they didn’t go anywhere. So what’s the difference between RCV and the way we vote now? 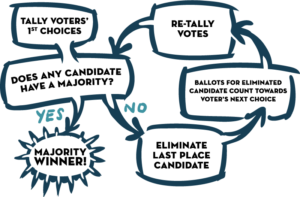 But the most notable feature about RCV is that voters rank the candidates by preference. In the simplest example, if there are three candidates on the ballot, you would rank them by your first, second, and third choice. If the initial tally shows no candidate received 50% of the vote, the third-place candidate is dropped, and that candidate’s second-choice votes are allocated to the two remaining candidates, based on voter selections. If there are multiple candidates, voting could continue through several rounds until the 50% majority is achieved.

Proponents of RCV believe this method results in a choice that has wider electorate support and results in more positive campaigns. When there is a wide pool of candidates, each knows they need to gain not only their own supporters, but also make a positive impression on the supporters of other candidates, so the others’ supporters can rate them high beyond their first choice. This makes sense in party primary races where multiple candidates are vying for the nomination, as it helps unite the party behind their nominees. It also makes sense in city or town council races where several members are elected from a large field, often running as non-affiliated or independent candidates.

The answer is probably “it depends.” Most general and special elections in Arlington consist of Democratic and Republican nominees — sometimes only Democratic nominees. When independent candidates are on the ballot, they seldom draw enough votes to prevent the plurality winner from also achieving a majority of the votes cast. In these situations, RCV is essentially moot, as the need to move to additional rounds of voting would not be necessary.

Looking back over about 20 years of Arlington elections, we only found one contest, the three-way special election for County Board in March 2012 between Democrat Libby Garvey (49.17%), Republican Mark Kelly (43.47%), and independent Audrey Clement (7.05%), where the winning candidate, Garvey, fell just short of 50% of the vote. If RCV had been used and Clement’s second choice votes were redistributed between Garvey and Kelly, it is possible that Kelly may have won because the margin was so close. But we’ll never know. (Note: write-in votes comprised the remaining .31% of the votes cast in that contest.)

In highly contested partisan primaries with multiple candidates, however, RCV could help the political party achieve consensus on their nominee, as well as prevent negativity in inter-party campaigning. If there are only two primary candidates in a vote-for-one election, though, RCV wouldn’t be necessary because the plurality winner would also draw the majority of the votes. 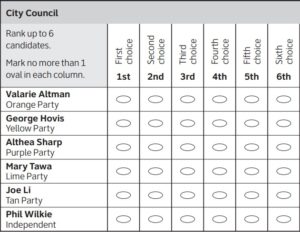 When our sticker selection committee selected five designs as finalists, we decided to use RCV in compiling the results. Actually, we used a modified version of RCV, where we asked voters to visually arrange the designs from their favorite to their least favorite. This essentially forced voters to rank all five selections. In a true RCV voting environment, voters can rank as many or as few of the selections they want. On the ballot, this usually involves filling in a grid. A ballot might look something like the example in Fig. 2.

Unlike our online sticker contest, voters don’t have to rank every selection on a ballot. They may only wish to make one or two selections. If they only make one selection and their candidate is dropped in the first round of voting, their vote is essentially lost, since there is no second choice selection to redistribute among the other candidates. In this situation, the votes cast for the office may not equal the sum of the votes allocated in the final round of voting, but you’d still end up with a winner gaining 50% of the vote.

Because we used a modified system to force ranking for our stickers, we could easily distribute the votes cast among the five sticker selections. The initial results showed no runaway favorite. After the first round, the 133 votes for the “Hear My Voice” design were distributed among the four remaining designs, based on the second-place selections of those who ranked “Voice” first.

Still no winner, so after Round 2, the “Arlington Star” design was dropped, and those voters were distributed among the remaining three options. But here’s where it becomes a little more complicated, as we had to look at not only the second choice of the ones who ranked “Star” first, but the third choice of those who ranked “Voice” first and “Star” second.

Third round: Still no winner. As you can guess by now, this meant dropping “Arlington Heroes” and distributing those second choice votes, along with the third choice from “Star” and fourth from “Voice,” to the remaining two designs.

Finally, in Round 4, we had a winner, and it was a close one, with “Shout It From the Rooftops” overtaking “Language of Diversity,” which had been ahead in the first three rounds, by a mere TWO votes!

But that’s exactly how RCV works. There were simply two more voters who chose “Shout” as their first, second, third, or fourth choices than there were those who chose “Diversity.” 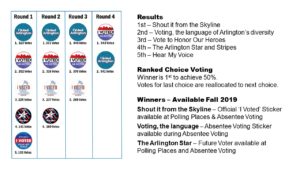 Congratulations to our five finalists! This was a fun contest and fun RCV experiment.